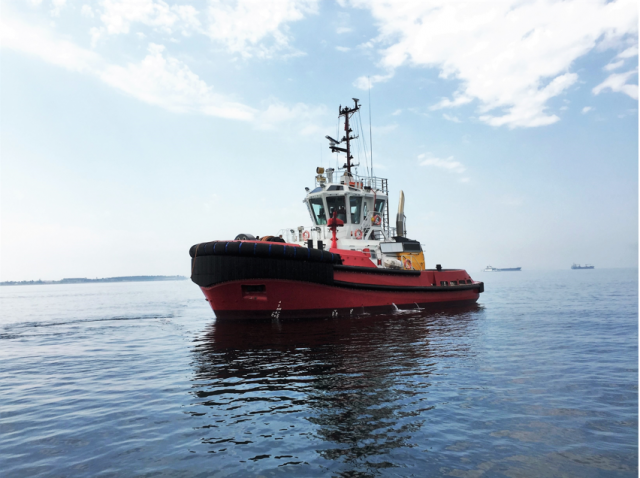 The contract is for the purchase of Sirapinar XV, a 2020-built tugboat based on the RAmparts 2200 design from Canadian naval architects Robert Allan Ltd, which is currently operating as part of Sanmar’s own fleet.

Designed for maximum efficiency in the performance of ship-handling duties for sea going ships, the 54-tonnes bollard pull Sirapinar XV will be the third Sirapinar series tug in the SMS Towage fleet, joining its sisters Pullman, built in 2017 and Lloydsman, built in 2019. It will become the 11th Sanmar-built tug in the fleet.
Measuring 22.4m LOA with a 10.84m moulded beam, least moulded depth of 4.4m and navigational draft of 4.89m, Sirapinar XV has a free running speed of 11 knots. It is powered by a CAT 3512C C rating main engine, producing 1.500 BkW at 1.600 rev/min and driving standard production 360-degree azimuthing Schottel SRP 360 FP thrusters.

Ali Gurun, Vice President of Sanmar Shipyards, said, “We are delighted to get 2022 off to a flying start by signing a contract with our good friends and long-term partners at SMS Towage. It is always pleasing when an existing customer comes back for more. Our Sirapinar class tugs have proved extremely popular because of their low-manning operation due to a high standard of machinery automation. They have also been widely acclaimed for their overall design and performance, particularly their manoeuvring, seakeeping and stability performance.”

The contract has a planned delivery date of October 2022 when the tug will be mobilized by a Sanmar crew.