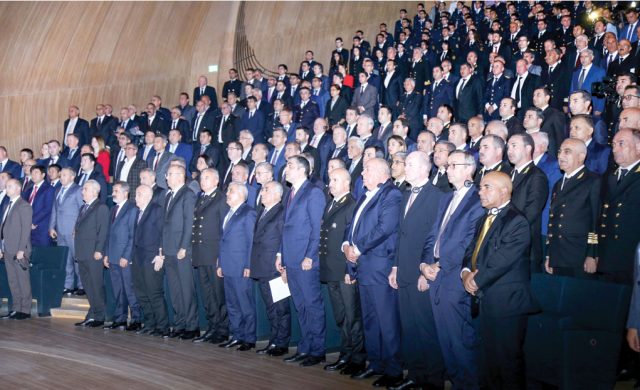 A solemn event dedicated to the 160th anniversary of Azerbaijan Caspian Shipping Company, which is considered one of the oldest companies in the country, has been held
Along with the managerial staff and personnel of the company, heads of several state agencies, heads and representatives of the local and foreign companies that the agency cooperates with, social and political figures, veteran sailors, students of Azerbaijan State Marine Academy also participated in the event held at Heydar Aliyev Center.
Prior to the official part, the event participants watched the exhibition “Shipping 160,” which featured more than 100 fine art (painting, graphics, sculpture) examples demonstrating hard labor of the Caspian seafarers, the development of shipping in our country and so on.
At the beginning of the official part of the event, a show of graphic video elements reflecting the history of Azerbaijan Caspian Shipping Company was presented.
Ali Asadov, the assistant of the president on the economic affairs- head of the department, read a congratulatory letter from President Ilham Aliyev to the sailors during the event.Making a speech in the event, Rauf Valiyev, the chairman of Azerbaijan Caspian Shipping CJSC, welcomed the guests and congratulated all the sailors on the anniversary occasion. He underlined that both during the years of national leader Heydar Aliyev’s political leadership and during the rule of President Ilham Aliyev, the development of the shipping industry has always been taken care of.Valiyev added that in the last five years of the company, international certificates on shipping have been received, and significant work has been done to ensure that operations are safe and environmentally friendly. He said that over the past five years 20 new vessels, which are modern type vessels involved in both freight forwarding and oil and gas projects, were included in the fleet of the company. In the same period, 14 vessels of the company, 12 of them being tankers and the remaining two being tankers, were put into operation in foreign waters.The head of ACSC CJSC noted that at present Baku Shipyard LLC is constructing two new generations of Ro-Pax / ferry type vessels for wagon-TIR and passenger shipping and four more ships. The first tanker constructed recently will be flooded and a contract will be signed with the plant to build four more unique tanks. In general, it is planned to purchase and construct more than 50 vessels by 2025.

Valiyev also spoke about the series of events dedicated to the 160th anniversary of the Company. He noted that currently the project “160 years – 160 flats” has been launched in Azerbaijan Caspian Shipping Company. Under the project, 160 employees, who are still in the queue since the USSR period, will be provided with housing by the end of the year. Activities will be continued in this direction and the number of sailors to be provided with housing will reach 490 people.

At the same time, the first ship museum in the Caspian Sea will be put into operation by the end of the year, and a monument will be erected in honor of our hero and brave sailors. Both the ship museum and the monument are intended to be located on the seaside boulevard near the Flag Square.

Valiyev also noted that in order to preserve the history of the shipyard of Azerbaijan a scientific book and a documentary film were made on the basis of historical research for future generations by the order of Azerbaijan Caspian Shipping Company for the 160th anniversary.

In his remarks on the five-year activity, the president of the CJSC noted that the existing infrastructure and material and technical base of the company have been considerably renewed, and the working conditions of both the floating and coastal staff have been fully adapted to the modern requirements. A new administrative building for Azerbaijan Caspian Shipping Company is being constructed near the Flag Square, one of the beautiful corners of Baku, and the building is planned to be put into operation at the end of the next year.

After Valiyev’s speech, the new name and logo of the shipping company were presented to the public. Thus, Azerbaijan Caspian Shipping Company, which has completed the glorious history of 160 years, entered the new era with a brand new brand.
The company also announced the launch of its internet website with a new design and a new name – www.asco.az.

Speaking at the event, Minister for Transport, Communications and High Technologies Ramin Guluzade said that modern transport infrastructure is one of the main indicators of the state’s economic development. In recent years under the leadership of Ilham Aliyev, special attention is being paid to the transport sector and shipping, which is one of its important areas, and important works are underway, he added.

The chief executive officer of Topaz Energy and Marine, Rene Kofod-Olsen, congratulated the management of the company and sailors on the occasion of the 160th anniversary.

Seyfettin Tatlı, American Bureau of Shipping’s Caspian Sea officer, said that the Azerbaijan Caspian Shipping Company’s activities are in full compliance with the requirements of the international standards. He noted that the company also successfully cooperates with the American Shipping Bureau in this direction.

Khoshbakht Yusifzadeh, the first vice president of SOCAR, congratulated the seafarers on behalf of Azerbaijani oil workers. The prominent oilman noted that the era of offshore oil in the world has just begun in Azerbaijan. Since 1949, oil and gas is also extracted from the deep layers of the Caspian Sea. Sailors of the Caspian Sea Oil Fleet of the company have been working on the Caspian shelf together with oilmen shoulder to shoulder from the very first day when valuable energy carriers were produced in the Azerbaijani sector of the sea.

Konstantin Palnikov, the general director of the Russian Maritime Shipping Register, spoke about the cooperation between ACSC CJSC and RMSR. Stating that the successes achieved in the application of modern management system in the company were praiseworthy, the director general expressed his satisfaction with cooperation with such a company as a classification society.

Later, Jamila Mammadova, who graduated from Azerbaijan State Maritime Academy with honors diploma this year, made a speech. The young sailor, who is the only female graduate of the 2018 Ship Driving School at the ASMA, said she is proud of studying at Azerbaijan State Maritime Academy. There are all conditions provided for students here and those who succeed in education are provided with job with the “Letter of Guarantee” of the ACSC CJSC. Having taken this opportunity, Jamila Mammadova, who is now one of the employees of Azerbaijan Caspian Shipping Company, spoke about her future goals.

On Oct. 20, President Ilham Aliyev signed decrees and a group of sailors were awarded for 160th anniversary of the Caspian Shipping and their services in maritime transport.
“Azerbaijan Caspian Shipping Company, celebrating its 160th anniversary, is implementing various projects to keep the history in minds. Among them are the books written by the order of Azerbaijan Caspian Shipping Company,” said Musallim Hasanov, who is the author of books about the history of the shipping company. He noted that both “Shipping in Azerbaijan – documentary history” and “History of shipping in Azerbaijan- history living in pictures” books are based on facts found in foreign and local archives.

One of the works on exploring, studying and preserving 160 years of history is the documentary film titled “Shipping in Azerbaijan: Pages of the history,” which was prepared on the history of the shipping by the order of Azerbaijan Caspian Shipping Company. Fuad Akhundov who is the author of the film and a researcher, spoke about this.

The anniversary event ended with the anthem “Long live, sailors!”. The anthem was sung by Mubariz Taghiyev, who is a people’s artist, of which lyrics belong to Zamina Khinaly and music to folk singer Faik Sujeddinov.