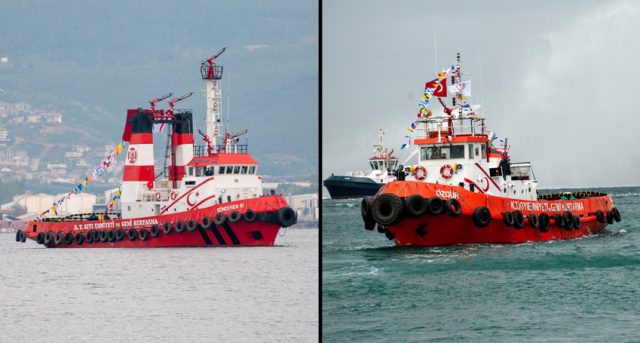 Two tugboats, which recently underwent modernization at two Turkish shipyards as part of a program for renewal of the Turkish Republic of Northern Cyprus (TRNC) Coastguard’s tugboat fleet, have sailed to the eastern mediterreaneant after their delivery.

The modernization of the tugboats, “SÖNDÜREN 10” and “ÖZGÜR”, was carried out by Turkey’s and the world’s top two leading tug producers. Two ceremonies were held at Uzmar Shipyard in Kocaeli and Sanmar Shipyard in Yalova. Turkey’s Minister of Transport and Infrastructure Selim Dursun and Director General for Coastal Safety Durmuş Ünüvar attended the events held on 20 October.

Uzmar Board President Ahmet Noyan Altuğ said, speaking at the ceremony held in the earlier part of the day, “We would like to express our government our gratitude for choosing us for SÖNDÜREN 10’s renewal and modernization, the biggest and most powerful tugboat of the TRNC. We mobilized entirely as a shipyard, and mobilized all our material and non-material resources in such a way that SÖNDÜREN 10 would be able to get back to its work in Eastern Mediterranean as quickly as possible. We have renewed the vessel from head to toe. What brings us here today is our love for our motherland, and our baby homeland.”

Deputy President of Sanmar Denizcilik Ali Gürün, who spoke at the ceremony held in the second part of the day, said Sanmar treated the tugs’ modernization as a priority, stemming from an emotional sense of responsibility. He continued, “We made great effort to complete the renewal works of ÖZGÜR as we continued our activities during the pandemic. We are feeling a great sense of emotional satisfaction from being able to completely renew and modernize the ÖZGÜR tugboat.”

In remarks shared with MarineDeal News, Gürün noted that back in January when the project had started, the tension in eaestern mediterraenan hadn’t climbed to its current height. “This project being conducted for Northern Cyprus and the knowledge that it will eventually contribute to navigational safety in the East Mediterrenean makes us additionally proud. We are grateful both to the TRNC Shore Safety and Turkish Shore Safety Directorates for giving us this opportunity. We are extremely proud of having completed this project.”

Shore Safety Director General Ünüver in a speech he made at the ceremony described the deliveries of ÖZGÜR and SÖNDÜREN 10 as an “important step” in the renewal of existing tugs of the Northern Cypriot fleet, and thanked both companies for their efforts.

Deputy Minister of Transport and Infrastructure Selim Dursun noted that the vessel traffic monitoring zones in the region had been expanded, adding that his ministry had released the Directive on Search and Rescue in Accidents of Marine and AirCraft. Both H&M and P&I policies of the tugboat SÖNDÜREN 10, classed by the Turkish LLoyd, have been provided by Türk P&I under the auspices of Shore Safety Directorate General. Similarly, the P&I coverage of ÖZGÜR was provided by Türk P&I with the support of the TRNC Shore Safety Directorate General.