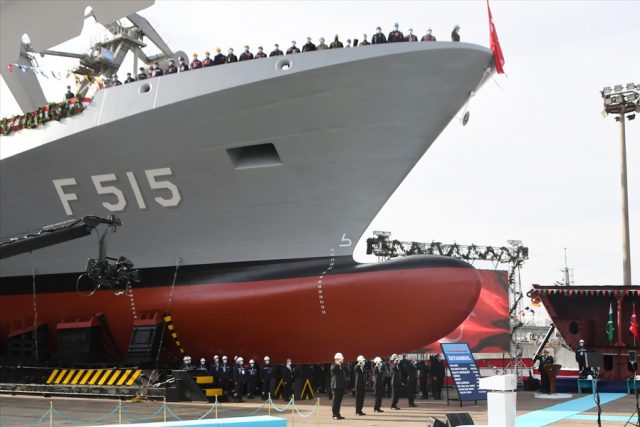 The vessel is the first I-class vessel to be produced under MİLGEM. Pakistan Navy’s third ADA-class corvette’s (MİLGEM) first welding was also conducted during the ceremony.

The 113-meter-long İstanbul frigate is expected to be delivered to Turkey’s Naval Forces Command in 2023 and will perform advanced air defense and surface warfare, submarine defense warfare and patrol activities.

The main contractor in the project is STM while the chief project partners are ASELSAN and HAVELSAN. The project is being implemented by the Defence Industries Presidency (SSB). The ship is being constructed at the Istanbul Shipyard Command.

The frigate, which will have a length of 113,2 meters and a beam of 14,4 meters when complete, has a displacement of 3,000 tons. Unlike the ADA-class corvettes, it will also carry and launch surface-to-air missiles.

The STM, as the main contractor is in charge of the design of the vessel, as well as weapons and electronics systems and the main propulsion system. More than 80 subcontractors take roles in the project for over 150 systems. The total number of contacted and outsourced companies working as part of the project is 220.

The system boasts an above 75 percent rate of local production, including a domestically produced electronic weapons system, a new generation national combat management system, radar and sensor systems and combat and navigation systems.