Ana sayfa Piyasa Ekonomi Will trillions of dollars be enough to undo the damage? 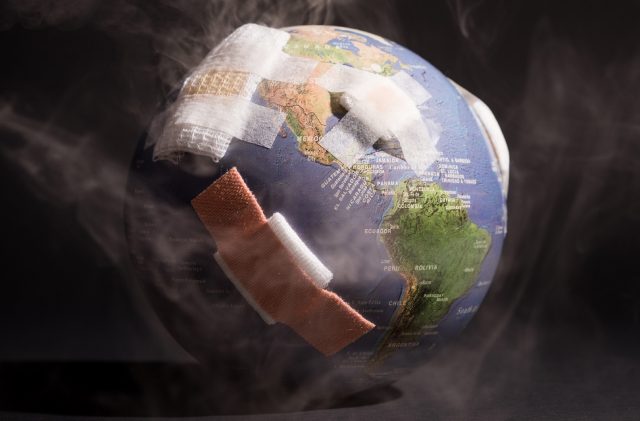 The situation is such that global commerce was dealt the sharpest below it had seen in the last decade in the month of March, when the damage from the pandemic reached a point where its effects became truly palpable. According to the World Trade Monitor report, in March 2020, the global trade volume fell by 4.3 percent, the sharpest decline it has seen since 2009. On a monthly basis, the decline in the global trade volume was 1.4 for three consecutive months. This sharp fall was only the first indicator of the damage stemming from the restrictions put in place to bring the pandemic under control. Surveys conducted after this period indicate that a deep recession is in store. The CPB Netherlands Bureau for Economic Policy Analysis, who are publishers of the World Trade Monitor report, has stated that partial figures for April also show a mostly negative picture, and leading indicators such as Global New Export Orders point to a stronger decline in global trade in the coming months.

Moderate scenarios no longer valid
The International Monetary Fund (IMF) asserts that the world economy is facing the largest economic contraction since WWII. The IMF, which predicted end-year global growth at 3% in the beginning of the year has revised that estimate to a 3% contraction in 2020. Kristalina Georgieva, the IMF’s managing director, said that recent economic data for many countries was coming in below the fund’s already pessimistic forecast adding that a further drop in global growth was to be expected. Projections of a contraction of up to 7.5% percent for Europe and 6% for the US economy, and between 2-5% for developing countries and only a very limited amount of growth for China, are enough to show the gravity of the situation. Most recently, European Central Bank (ECB) Chief Christine Lagarde, in an online Q&A session on the ECB’s response to the Covid-19 crisis, said that the ECB’s mild growth scenario is already outdated. Her words also are seen as a hint at the humongous problems that await nations and central banks in the period ahead.

Public debt-to-GDP ratio over 100%
Now, let us, if you will, take a closer look at the economic squeeze created by the Covid-19 crisis. Many central banks in this period, in an attempt to protect the economy during the pandemic, started printing an immense amount of money. Developed nations announced financial packages totaling to 8 trillion dollars. The US, with a package of 2.8 trillion dollars, tops this list. This figure alone is enough to show how devastating Covid-19 has been on the economies of nations. Economists say that the actions of central banks indicate that the first two quarters of the year have been disastrous, with unemployment reaching unprecedented figures and that central banks expect public debt to rise further. The essence of the entire episode is that central banks are now working hard to save the current system and the total of finance packages introduced in this period might well go above the current 8 trillion dollars. At the same time, it is worth noting that the 7.5 percent contraction predicted in Europe is also vital for Turkey. Statements by finance leaders indicate that it is not clear whether the money spent to keep the economy afloat in Europe, Turkey’s most important exports market, will be effective. The ECB is not certain that the steps taken will work. The actions taken are expected to bring the public debt-to-GDP ratio in Europe to more than 100% from 85%. Similarly, budget deficits, which were previously non-existent in Europe, are expected to jump to 8 – 10 percent. In the US, 30 million were left without jobs within just eight weeks due to the pandemic. The US economy, which shrank by 4.8 percent in the first quarter, is expected to contract by more than 30 percent in the second quarter of the year. The end-year expectation is a 6.5 to 7 percent contraction.

Huge rift between the real economy and financial markets
Central Banks have taken other measures in support of their economies. Central Banks of five developed economies have committed to USD6-trillion-worth bond pur chases. Economists say that this figure is unprecedented. FED will be buying corporate bonds for the first time in its history, while the central bank of Japan is even purchasing corporate shares. In summary, central banks are supporting the public with treasury bonds and companies with corporate bonds to inject liquidity into the market. There are even purchases of company shares in order to prevent a complete market collapse. Economists say that post-Covid, when things begin to normalize, the legacy of these actions will remain in the form of public debt. Economists say that the last time public debt reached such a high level as now was during WWII. In The US, WWII was the time when the public debt-to-GDP ratio surpassed 100 percent – same as the current situation. Similarly, the budget deficit reaching 18% in the US is significant cause for alarm, economists say. They also note that the public debt-to-GDP ratio in Italy, Greece and Spain has already reached 150%, with this level remaining at 60-70% only in Germany. In other countries in Europe, the public debt-to-GDP ratio will hover around 100%,. Experts say that all of these developments will contract room to maneuver for these countries in the period ahead. Economists also say that a widening rift between the real economy and financial markets is another reality of the current period and that the money injected into the economies are causing bubbles in financial markets, warning of an increasing detachment between financial market indicators and what is going on in the real economy.