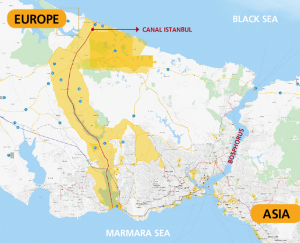 Istanbul Metropolitan Municipality has released the details of the construction and zoning plans for Kanal Istanbul project, which will be built on the European side of Istanbul and connect the Black Sea to the Sea of Marmara.

The plans for the artificial sea-level waterway and a new town to be located on 95 acres will be issued by the Municipality.

Building permits will be issued after approval by the Ministry of Environment and Town Planning. The ministry has “reserved” an area that is included within the borders of the districts of Avcılar, Bağcılar, Bakırköy, Arnavutköy, Başakşehir, Esenler, Eyüp and Küçükçekmece. The new town’s population is expected to be around 500,000.

President Recep Tayyip Erdoğan recently said that he is in talks with representatives from the companies that will carry out the Kanal İstanbul project – which Erdoğan refers to as his “crazy project – although an official tender for the project has not been conducted.

“We met with the firms that are going to be behind Kanal İstanbul. We told them: ‘You need to start the project right away. Hurry up and don’t delay.’ This project will be of the utmost importance to raise Turkey’s name on the international platform,” said Erdoğan.

The Kanal Istanbul project is to be built on the European side of the city, connecting the Black Sea to the Sea of Marmara leading to the Aegean and Mediterranean seas. The project plans on bisecting the current European side of Istanbul, forming an island between the continents of Asia and Europe.

Kanal İstanbul has been lambasted by environmental critics who argue that such a project would have disastrous consequences for the ecological balance of the surrounding waters.

Iran’s IRISL to launch shipping lines to Russia and Kazakhstan

New board elected at WISTA to promote equality in the industry