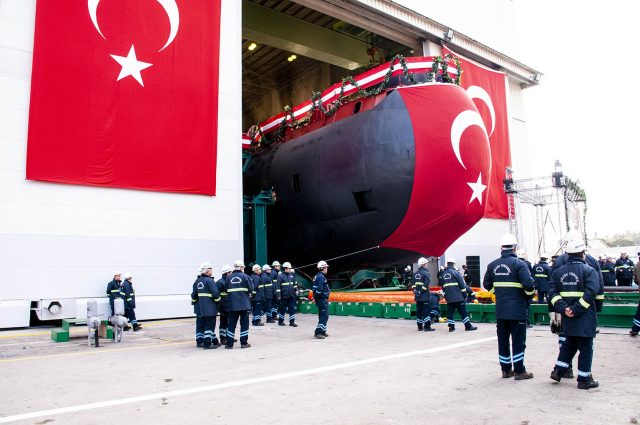 Piri Reis, the first of Turkey’s New Type Submarine project hit the seas on 22 December at a ceremony held at the Gölcük Shipyard Command in the northwestern province of Kocaeli. During the ceremony, the first weld of Seydi Ali Reis was also carried out.
Piri Reis is scheduled to start operating in 2020. The Reis class submarines, all of which are slated to enter service between 2022 and 2027 are the first air independent propulsion submarines of the Turkish Naval Command.
Piri Reis, part of the New Type Submarine Project being conducted by the Undersecretariat for Defence Industries has a hull diameter of 6.3 meters, a full length of 67.6 meters (3 meters longer than standard submarines), a 13-meter beam, 6.8 meters draught, 1855 tons of above surface and 2013 tons of displacement underwater.
The submarines, which are designed to run on hydrogen fuel cell technology, have the capability of conducting operations for weeks underwater, in addition to stealth operation capacities. Their addition to the fleet will enhance the Turkish Naval Command’s combat effectiveness significantly. The vessels also can deploy heavyweight torpedoes and anti-ship missiles and lay mines against targets, both at sea and on the ground. As Piri Reis has been taken into pool, the second submarine Hızır Reis is being equipped and the hull construction of two others are underway.
“Our R&D work will be used in
future projects”
İsmail Demir, the President of Turkey’s Defence Industries (SSB) said the New Type Submarine Project is an important programme that goes well beyond being just another defense contract. Emphasizing that the project has turned into an exemplary model of public and private sector collaboration, Demir said: “As part of this program many governmental institutions such as the Ministry of National Defense, the Ministry of Treasury and Finance, the Ministry of Industry and Technology, the Ministry of Commerce, the Turkish Naval Forces Command, the General Directorate of Shipyards, and the Gölcük Shipyard Command have worked in coordination and harmony in all the activities conducted by our presidency. At the same time, the products developed for submarine platformers and underwater technology employed in the project were developed by a number of private sector organizations such as Aselsan, Havelsan, STM, Milsoft and Gürdesan. Within the scope of the contract, new systems and devices were provided to the Ministry of National Defense Gölcük Shipyard Command, Battery Factory Directorate and Research Center Command as part of activities for modernization of various infrastructures. Similarly, technology transfers were made to the private sector increasing these companies’ capacity to design, manufacture and test the systems and devices to be used in submarine platforms and underwater vehicles in the coming years. Within the scope of the New Type Submarine Project, we have begun to receive positive results thanks to the technology transfer, infrastructure development, localization and industrialization activities carried out by our agency.”
Demir further added: “It is also a strategic project that involves the completion of multidimensional objectives such as technology transfer, infrastructure development and technical personnel training, product localization and industrialization. As part of this, R&D activities have been initiated for the development and employment of existing systems in the Reis Class submarines that will be included in the inventory of the Ministry of National Defense. Development of domestic and national fuel cell electric motors, batteries and various types of sonars has started within our agency. The use of the products developed within the scope of R&D efforts in ongoing and future underwater platforms and the fact that these products are increasingly being preferred globally are all part of our medium and long-term plans and strategic objectives. The submarines built in this project use fuel cell technology from three different systems used in the world for air independent propulsion systems, and this is a first for our Navy. The Piri Reis submarine will be put into service in 2022. The other five submarines that are currently under construction are expected to enter service by 2027 and add to the strength of our Navy.”