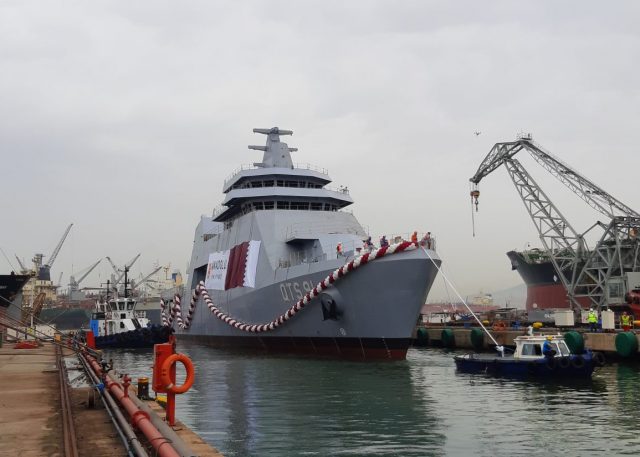 Al Doha, first of the Cadet Training Ships (CTS) built by Anadolu Shipyard for the Qatari Armed Forces has been transferred to the water.

Al Doha is the largest military ship ever produced and exported by a private sector company in Turkey, being 90 meters long and 14,2 meters wide, and weighing 2150 tons.

The OPV-design vessel will have a maximum speed of 22 nautical miles and an eco speed of 15 nautical miles. The entire design of the vessel was carried out domestically at Anadolu Shipyard.

The CTS, equipped to accommodate 150 people, is designed to train 76 cadets and eight trainers, not including the ship’s crew of 66.

Al Doha boasts a large number of technical capabilities, including helicopter-landing and refuelling. The vessel can remain at sea for 15 days without refueling. In addition to training, the ship will be able to render logistics support, as well as patrolling and escorting services.

The design and installation of the weapons systems of Al Doha were also carried out by Anadolu Shipyard. The vessel has the capability of daytime and nighttime helicopter missions, artillery support and can provide emergency health services.

The ship’s construction had started on 25 February 2019, as part of a contract between Anadolu and the Qatari Armed Forces for the delivery of two CTSs. Al Doha is expected to start service next year while the estimated time of Al Shamal – the second vessel – for entry into service is 2022.